NASHVILLE, Tenn. (Feb. 6, 2018) – A new survey of likely Tennessee voters reveals concerns about the security and modernity of Tennessee’s elections and a desire among members of both parties to see state policymakers doing more to improve the system.

Results from the poll were released today by the nonpartisan think tank ThinkTennessee, which commissioned the statewide survey of 700 likely Tennessee voters. The live-interview telephone survey was conducted Jan. 23-25 by Revily Insights.

The results underscore the urgent need to implement modern policies and procedures to protect the integrity and security of Tennessee’s physical and digital election infrastructure.

“It’s critical that Tennesseans have faith in our electoral process from the moment they register to vote to the time the winning candidates are announced,” said Shanna Singh Hughey, ThinkTennessee president. “As threats to election security continue to increase nationwide, we’re hopeful that these findings spark productive debate about solutions to keep Tennessee elections safe.”

A majority of voters from both parties reported that they had concerns about various electoral threats, including the attempts by foreign governments to influence elections, computer hacking and outdated infrastructure.

Moreover, seven in ten (68%) voters, including a majority (66%) of Republicans, said that current protections are not enough and that the state government “should being doing more to ensure our elections are modern, secure and free from tampering.”

Other states have modernized their systems by increasing database security protocols and adopting safeguards that ensure eligible voters are correctly added to the rolls, both ideas that garner wide support from Tennessee voters. Indeed, 72 percent of all voters (71% of Republicans) say they would support improvements to the way voter data is shared between state agencies to increase the accuracy of voter rolls.

“This level of favorability is rare in today’s highly divisive political climate,” said Ryan Burrell, a researcher and strategist with Revily Insights, “And it reveals that voters recognize the problem and are overwhelmingly supportive of making a change to do better.”

For more on this data, read the full Revily Election Security Memorandum. 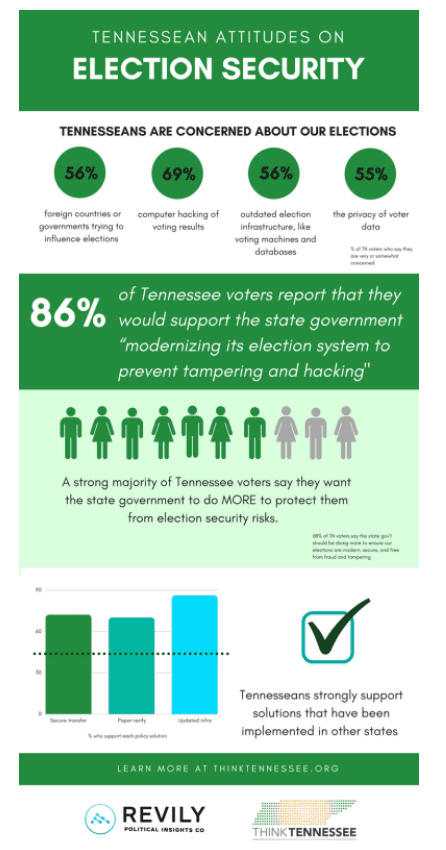