NASHVILLE, Tenn. (March 24, 2021) – Seven in ten Tennessee voters (72%) are concerned about the high rate of Tennesseans with debt in collections, and a majority support reforms that would reduce government penalties on those in financial distress, according to a new online survey of 504 Tennessee voters conducted by Hart Research Associates from February 3 to 11, 2021.

ThinkTennessee commissioned the poll to better understand how delinquent debt and its associated penalties are affecting social and economic mobility in the state.

“The Covid-19 pandemic has brought to light just how many Tennessee families lack economic security,” said ThinkTennessee president Shanna Singh Hughey. “The bad news from this poll is that Tennesseans from all walks of life have debt in collections, and they’re struggling financially. But the good news is that most voters support policies that will reduce debt and help Tennesseans move toward a solid financial future.”

– Tennesseans are worried about the economic consequences of the Covid-19 pandemic. When asked to name the most important issues facing Tennessee, 35% of voters say Covid-19, which is the top issue, followed by issues impacted by Covid-19, including the loss of jobs/unemployment (21%) and the economy/economic issues (20%).

– Tennesseans from all walks of life report having suffered financial hardship. Nearly a third of Tennessee voters (30%) say they have experienced at least two forms of financial difficulties in the past five years, including nearly half (48%) of young (18- to 34-year-olds) and Black Tennesseans (also 48%), and roughly one quarter (24%) of those with household incomes above $100,000.

– Voters are much more likely to believe that those who are struggling financially are doing so due to circumstances beyond their control (72%) as opposed to a lack of effort on their part (28%).

– When voters learn about the fact that 37% of Tennesseans have debt in collections, a majority are concerned, with this concern expressed across party lines. After reading that 22% of Tennesseans have medical debt in collections, 15% are in default on student loans and 5% are in either auto/retail or credit card debt, seven in ten voters (72%) say they are very or fairly concerned about this. Concern spans across party lines and includes 85% of Democrats, 68% of independents and 65% of Republicans.

– Most voters believe that many penalties imposed for financial struggles are unfair. Large majorities of Tennessee voters say it is unfair to charge someone court fees when he or she is not convicted of wrongdoing (90%), to deny or suspend a professional license if student loans are in default (82%) or to revoke a driver’s license for the inability to pay court fines or fees (71%).

In addition to demonstrating voters’ strong opposition to a variety of penalties, the survey also highlighted promising areas for policy intervention, including government reform (93% of Tennessee voters, including 93% of Democrats and 91% of Republicans, support a review of the state’s 360 court fines and fees to determine whether they are effective) and repayment options that reflect one’s ability to pay (86% of voters support a proposal of this nature for medical debt, including 94% of Democrats and 77% of Republicans). Majorities of Democrats and Republicans also support repayment options based upon one’s ability to pay for student loan debt and court debt. 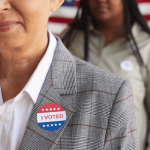 In Tennessee, women are more likely to vote but less likely to hold elected office.Press