“I am incredibly impressed with the organization that Shanna, the board, and the staff have built over the last five years,” said Hafkenschiel. “ThinkTennessee has already proven itself to be a trustworthy source of high-quality research and data on a wide variety of issues impacting Tennesseans. I am thrilled and honored to have the opportunity to build on its amazing reputation and work as we keep moving Tennessee forward.”

Hafkenschiel joins ThinkTennessee after a distinguished career in public policy, including roles in higher education, municipal government, and philanthropy. As the executive director of Mobility at Vanderbilt, she launched the university’s first-ever transportation office, oversaw the development of MoveVU, Vanderbilt’s strategic transportation plan, and has implemented a comprehensive transportation demand management plan for the University. Hafkenschiel previously served as director of the Mayor’s Office for Transportation & Sustainability for the Metro Government of Nashville & Davidson County under both Mayors Megan Barry and David Briley. Her public policy career began with the William and Flora Hewlett Foundation, where she helped develop and execute strategies and initiatives focused on climate change, sustainable cities, environmental sustainability, and conservation.

Hafkenschiel received her bachelor’s degree in Political Economy from the University of California, Berkeley, where she was also captain of the varsity women’s lacrosse team. Additionally, she is an alumnus of the Harvard Kennedy School, where she received a master’s degree in Public Policy and Urban Planning. She is currently pursuing a doctoral degree in Civil Engineering at Vanderbilt University.

“In this time of political discord, we need policy leaders with the capacity to bring together people across the political spectrum to address complex societal challenges,” said Bob Cooper, chair of the ThinkTennessee board of directors. “Erin has demonstrated the ability to work across partisan divides and find solutions that move communities forward. That’s exactly what our state needs, and why we’re so happy to have her join the ThinkTennessee team.”

Since its launch in 2017, ThinkTennessee – the state’s only forward-looking think tank – has become a well-funded, well-respected entity with high-profile board members from each of the Grand Divisions and a powerhouse staff dedicated to empowering voters, supporting working families and moving Tennessee forward. Together, they have led efforts to strengthen Tennessee’s election system, protect state courts from politicization and advocate for an open and transparent redistricting process.

Hafkenschiel will officially begin her tenure at ThinkTennessee on March 7. Hughey will move on to her next role as a fellow for the Emerson Collective’s Democracy Cohort, where she will author a playbook to help keep democracy alive and thriving in America.

“Erin is an incredible leader who will ensure that ThinkTennessee continues to build momentum around our civic and economic priorities while growing our team and increasing our capacity to drive impact across the state,” said current ThinkTennessee President Shanna Singh Hughey. “I’m proud of all ThinkTennessee has already accomplished. And under Erin’s leadership, our future looks brighter than ever.” 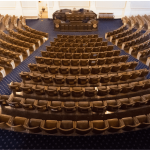