Tennessee’s redistricting process officially kicked off this fall. Both the House and the Senate formed redistricting committees, and each has now held its first meeting.

This summer, ThinkTennessee published a primer that outlined the redistricting process, from its legal requirements to suggested opportunities to increase community engagement. Earlier this month, we released an overview of how peer states are seeking public input and actively sharing redistricting information.

Now that the redistricting committees have met, details have emerged about how this once-in-a-decade process will work this time. Interested in learning about current opportunities for community engagement, how this year’s redistricting process compares with previous cycles or additional options for legislators to consider if they want to increase public input?

Here’s what we know so far…

Tennesseans can participate in the redistricting process in three ways: (1) contacting state legislators, (2) submitting draft maps and (3) watching – and potentially participating in – the legislative process.

THE LEGISLATIVE PATH TO FINAL MAPS

While there are some laws and guidelines outlining the redistricting process, Senate and House leadership have the flexibility to dictate how the process will look each cycle. To see how the 2011-2012 process worked, take a look at our three-part redistricting brief series here.

This year, Tennesseans have a once-in-a-decade opportunity to understand and participate in redistricting, and legislative leaders have expressed their commitment to making our state’s process an open one.

Many states in the South host legislative hearings and community meetings that include options for virtual participation, and they share draft maps before they are finalized to allow residents time to meaningfully weigh in. These ideas may hold lessons about how to increase community engagement in our own state. 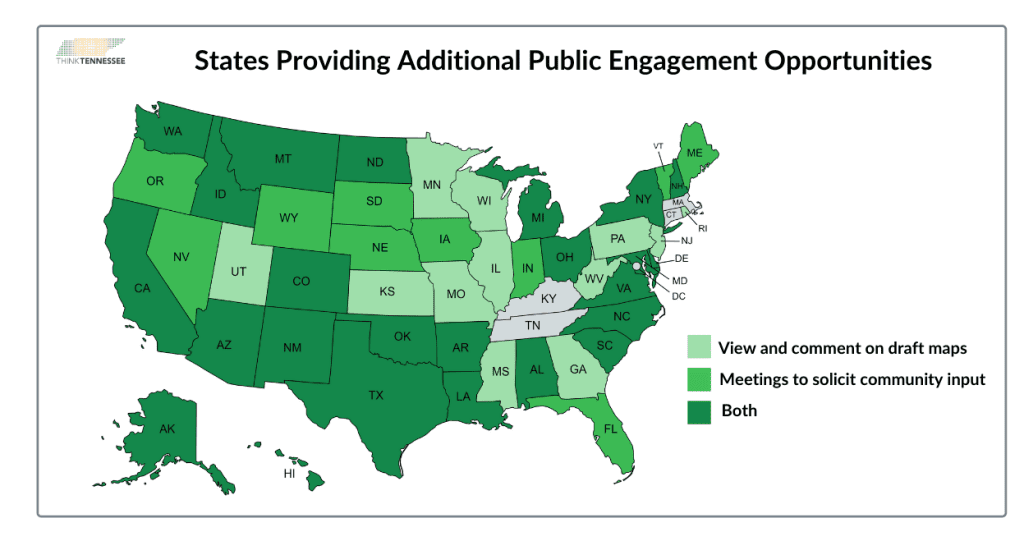